Why we need our Indigenous Cows (The Indian Cows)? 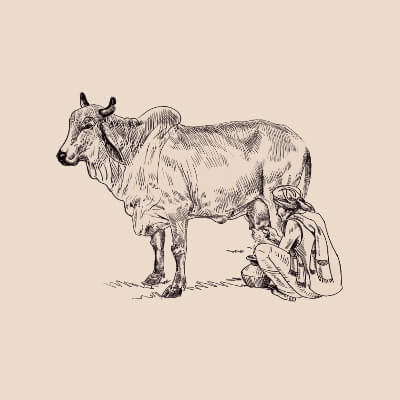 As a primarily agrarian economy, cows have always been at the centre of our lives right from ancient times to now. According to legend, it is believed that the cow (Kamadhenu) emerged from an ocean of milk at the time of samudramanthan –that is, at the time of the great churning of the ocean by the gods and demons. And now, it is equally relevant for exactly the same reason as the legend proclaims – the life sustaining milk that it provides us with.

Ayurveda exalts the sattvik qualities of pure Indigenous Cow milk and milk products. Apart from the nutritious benefits of calcium and vitamins and proteins that are there in Indian Cow milk, it is also proclaimed as the source of Ojas – the energy that gives our body strength and immunity. Logical enough then, that we need to preserve and protect the source of Indian Cow milk that has life sustaining qualities.

However, with the changing times, and due to apathy and misinformation, we have been largely neglectful of our breed of indigenous cows.

Of the over one hundred and twenty indigenous breeds of cattle in India, only thirty-seven exist – the rest have become extinct. It is crucial that the remaining ones are preserved.

The indigenous cow breeds are really potent sources of good quality milk. Scientific research has proved that milk from these cows, is called A2 Milk, which means that it keeps you safe from coronary disease and eliminates the cause of lactose intolerance. This milk is easier to digest because it is free of the protein that is found in A1 milk. A1 milk supposedly has opiate-like effects which might lead to development of mild to serious medical conditions.

It is a misnomer that foreign bred cows are giving more nutritious milk. The real truth is that indigenous cows are far superior both as milch cows and work animals. Even the dung of these cows is very useful in agriculture and maintain ecological balance. Let’s see how.

The digested organic matter “slurry” can be used as a natural fertiliser for crops thus reducing the need for chemical fertilisers.

Unfortunately cows are victims of neglect in cities, where they have to rely on garbage for survival. Oftentimes they die due to the dark menace of polythenes.

A couple of years ago, many people participated in a 25,000 km walk over a period of 108 days, that lasted from 30 September 2009 to 17 January 2010. The message was: ‘Saving cows is saving India’s soul.’ If we need to preserve the health benefits that accrue to milk, we really need to get serious about the preservation of our indigenous breed of cows.