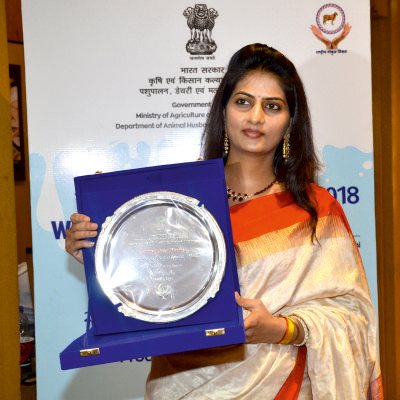 There are only three Gaushalas which would be awarded with the Gopal Ratna Awards in the entire country.

There is a stringent process of nomination for the award. The State Govt veterinary officer physically verifies the applications and then sends them to the State Committee, which evaluates three recommendations submitted by the DVOs of the State. The State Committee then forwards the best three names for the national award.

There are several parameters for determining the winner of the award. The methods of breeding, quality of fodder, the shelter management and housing practices with respect to open area and cleanliness, are some of the factors taken into consideration. Technology management and animal husbandry practices are other parameters.

The award is a huge achievement in the light of the strict selection process for nomination and an even stricter code of evaluation. Klimom, with its gaushala of 200+ cows, breeding them only with the Gir bulls is helping in conserving as well as increasing the population of the indigenous Gir cows. Added to that, the open grazing spaces and organic fodder being fed to the cows, help in giving them a natural environment. Even the grass is grown for cows on the farm itself.

Having won the award is a recognition of Klimom’s effort headed in the right direction – in maintaining healthy cows and therefore being able to get healthy pure milk in return. It is a reinforcement in the belief of breeding healthy cows for delivering healthy milk.

Allola Divya Reddy strongly believes “At Klimom, it’s not just about milk, it’s much much more. It’s a mission to get back the glory to our sacred Indian Cows.

Related Posts
Cow Ghee and Diabetes A2 Ghee and cancer protection Get back together with milk The difference between food allergy and food intolerance Why we need our Indigenous Cows (The Indian Cows)?
A2 MilkCow MilkDesi cow gheeGheeorganic ghee