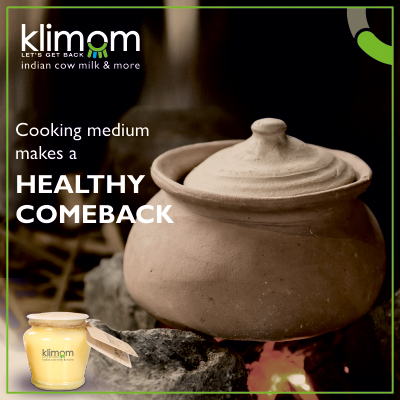 “Prior to about 1960, Indians used Ghee high heat cooking. Other vegetable oils were used for pickling, added to chutneys and otherwise used in food raw or for low heat cooking.”

When we were children , all the cooking done was in Indian Cow Ghee.

Desi Cow Ghee was considered good for health. In winter, a spoonful of ghee would protect us against colds, and ghee with a few peppercorns added was supposed to improve your eyesight.

By the time we became a teenagers, Ghee had undergone a total transformation. Ghee was exposed as the baddie it was.

In those days, people didn’t use words like cholesterol, or triglycerides, but Ghee became the prime suspect if people put on too much weight and developed heart problems.

So what did one use as a substitute for the so called “Villainous Ghee” ?

The answer was a generic product called vanaspati.

It was widely believed that, unlike Ghee, vanaspati wouldn’t make you put on weight, or get heart disease.

Ads, showing a proudly smiling mom feeding her family stacks of puris and parathas, all fried in vanaspati, endorsed the goodness of this new-found cooking medium.

Cooking oil was a staple food item in every household. While there were several types of cooking oil, vegetable oils became the most popular cooking oils in India.

Then – horror of horrors – it was revealed that vanaspati was made of something called hydrogenated fat which was as deadly to your health as the hydrogen bomb it sounded like.

Hydrogenated fat would clog your arteries and was a sure-fire recipe for a coronary attack. So everyone switched to cooking with oil. For soon oil wars broke out as to which oils were healthy, and which were not.

Unfortunately, there are several safety issues plaguing cooking oils, and one of the biggest is that of rancidity.Rancidity of cooking oil is one of the biggest threats to people’s health in India, and we need to be aware of the risks associated with it, as well as the simple steps required to minimise these health risks.

And now the culinary trend has come full circle. Foodies and nutritionists say that asli ghee, after all, is not just the most healthy of cooking mediums, but also the most flavoursome.

Not to worry if you haven’t replaced Vegetable oil to Ghee. It’s never too late when it comes to making a positive change for good health.

There are so many benefits to using this ingredient in your day to day cooking that far outweigh any of the cons.

Ghee has a high smoke point :
Smoke point is the single most important factor to consider when choosing an oil to cook with. Especially when you are cooking food at a high flame, which is the case with all Indian foods.

Medicinal properties of ghee :
Ghee is sometimes like the very welcome free gift on a purchase which comes as a surprise. There’s so much it has to offer but so little we know about it. Since the ancient times, ghee is considered to be very healthy. In fact, it is used extensively in Ayurveda too as a cure for many diseases

Ghee is easily digested :
Want to avoid that icky feeling of heaviness after having your meal, especially something fried in oil? That’s something that doesn’t exist when you eat food cooked in ghee. Ghee makes even fiber-rich food easy to digest without making you feel heavy and bloated.

Process of producing oils vs. ghee :
The refining process that store bought oil goes through involves the addition of chemicals and application of really high temperatures. This results in a chemical residue which is unnecessary and unhealthy.

Ghee is better for your heart :
If you have a cholesterol problem, don’t have ghee they say. They are all wrong. Ghee, in fact, has many antioxidants that help protect the heart and many other organs in the body. These fight against the development of fatty deposits in the arteries

This is just another dietary fad whereby one consumable gives way and another takes over, in a constant game of give-and-take? Or, in this case, ghee-and-take?