Kanuma – going back to the traditions of cow worship 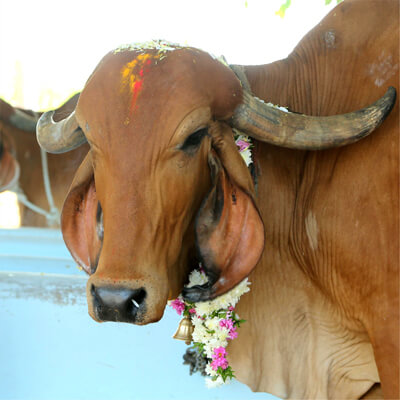 Sankranti is just one festival but the festivities continue for four days at a stretch. It’s almost like a wedding in the family that comes at the start of every year.

The rituals are a beautiful mix of fun, devotion, and gratefulness for the bountiful gifts of nature. If you have ever been to a traditional village during this time of the year, you will understand the true importance of this period.

The first day of Sankranti is kicked off with Bhogi, the second day is called Pongal or Makara Sankranti, the third day is what is celebrated as Kanuma and the fourth day is called Mukkanuma. Each day has a specific set of rituals that are to be followed. And each ritual has a special meaning, especially for farmers whose livelihood revolves around agriculture.

Let’s talk a little bit about Kanuma, which is celebrated on the third day. It’s likely that you haven’t heard of this as it is more prominent in the rural areas of Andhra Pradesh and Telangana.

According to Hindu Mythology, this was the day when Lord Krishna rescued the people of Gokul from floods. The Govardhana Hill blocked the clouds leaving the land dry and drought-prone. But when Lord Krishna asked the people to pray to the hill for rains, it angered Lord Indra (Rain God) and he flooded the city.

That is when Lord Krishna lifted the Govardhan Hill with one finger to provide shelter to the cattle and the people. Kanuma is celebrated as a commemoration of Lord Krishna’s victory.

This day is especially close to the hearts of the farmers as it revolves around praying for their cattle and giving them the honor they deserve. Which is why many people outside of the farmer community may not know too much about the relevance of this day.

You can think of it as a day of thanksgiving to the cows and bulls for a bountiful harvest. After all, a farmer owes his prosperity not only to the land and crops but also to the cattle that help with agriculture.

While in many fields modern farming equipment has replaced the animals, the practice of revering the cattle still continues. Kanuma is a rest day for the animals and they are not made to work on this day.

Animals, especially cows, are extremely valuable to a farmer in more ways than one. They are an indispensable part of farming life in villages where resources are limited. Here’s why:

For all these reasons and more, this day of Kanuma, celebrating the cattle used in agriculture, is very significant. On this day the cows and bulls are at the center of the celebrations.

For all these reasons and more, this day of Kanuma, celebrating the cattle used in agriculture, is very significant. On this day the cows and bulls are at the center of the celebrations.

The animals and their sheds are thoroughly cleaned before the start of the ceremonies. Then they are beautifully decorated with flowers and ornaments. They are covered in colourful clothes and tiny bells.

Holy kumkum is smeared on their foreheads as well. The grandly decorated animals are then taken out for a procession on the streets with Sannai/Nadaswaram music. In some of these processions, these “Gangireddu” troupes even earn money, new clothes, grains and famous Sankrati sweets (ariselu and bobatlu) for their performance.

The animals are taken for Govardhan puja (cow worship) at the local temples. The farmer’s grandeur is reflected in the health of the animals that he showcases during the processions. It’s quite an added incentive for them to look after the creatures all year round.

These rituals go back many many years as you can tell. Especially the practice of worshipping cows. Humans have been depending on cows for years together for their for dairy products, for ploughing of fields, and for the cow dung which is a fertilizer and fuel too. Which is why these creatures have been given a mother figure status.

Even the goddess ‘Bhumi Devi’ (Earth God) is symbolized as a cow in the Vedic tradition. Resources and nourishment we get from the cow are likened to the giving nature of mother earth.

Another reason why cows are worshipped is for their gentle nature. They are really mild creatures who don’t harm any other being. Instead, they are always giving back to the others. It is because of this nature, the cow is given a holy status by many believers. Afterall giving without expecting anything in return is the ultimate virtue!

Kanuma – lets get back to the traditions of cow worship