Embracing our traditions and harvesting prosperity 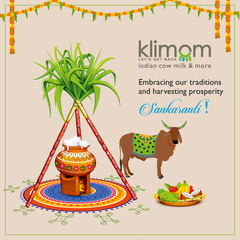 A harvest festival, one that’s all about the backbone of our economy, a time to unite with family and bond with cousins, that’s what Sankranti has been synonymous for many, and then there are also those, who think of it as just any other holiday.

Traditionally Sankranti celebrations meant a time to come together as a family and pay respect to everything about agriculture, which includes even the cattle,that was an integral part of farming. Every ritual was centered around worshipping and paying respects to the animals.

Cows for instance are bathed and smeared with turmeric and vermilion, and worshiped like a deity in the house, after which they’re treated with the festival special delicacies before any  other member in the house. The reason behind this is, cow is seen as a symbol of prosperity and wealth, and Pongal or Sankranti is seen as a time to pay respects to this member of the family.

To ensure that the native cattle breeds are preserved and treated well, many animal lovers are setting up cattle farms, and Klimom is one of them.

Established with the determination to protect the Indian Gir cow from becoming extinct, Klimom farms are more of a GoShala than a dairy farm. And in these farms the cows are given the perfect environment where they can thrive in happiness.