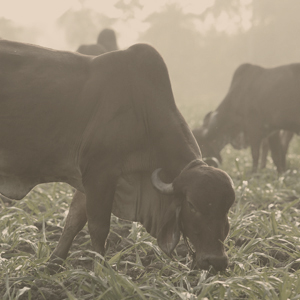 To name a few, it is said that organic cows require fewer breeding attempts when compared to conventional cows. They also produce milk through twice as many, shorter lactations than do hormone-infused conventional cows – all while living longer. Besides, researchers have also discovered that cows on organic dairy farms are healthier and less stressed than conventional cows, largely thanks to a more natural, forage-based diet instead of the grain and ground-up bones that usually pass as cattle feed on factory farms. Further, studies in the same line have shown that cows on healthier, forage-based diets produce far less waste than those on conventional dairy farms, and as a result, most organic farms reduce manure methane emissions by 60-80%, thus, contributing to a healthy environment for both, the Indian Cows and human beings.

At Klimom, we ensure that all the elements that can contribute to creating an environment conducive to the growth and betterment of the Indian Cows are provided. And all this in their natural habitat! At Klimom farms, the Gir cows are nurtured with love and passion thus leading to production of healthier milk by the cows and a healthy long life. Klimom farms have been especially designed to ensure minimum manure methane emission, thus, making them environment friendly. Besides, the availability of large graze at Klimom, where the Gir Cows enjoy plenty of exercise, fresh air and clean water coupled with feed of herbs and nutritious daana ensure that their cows are always healthy.

Some interesting facts about the Indian Gir Cows reveal that the Indian Gir Cows reared at Klimom, having their origin in the Gir forest region and surrounding districts of Saurashtra region of Gujarat State have a population of about 2.5 million and Gir breed accounts for almost 37% of total cattle population in the region. The Gir cattle breed is known for its high milk production potential, heavy build and docile temperament. It is a moderate to large size breed. Cows weigh 400-475 kg and bulls 550-650 kg. The Indian Gir cows live for 12 to 15 years and do not face problems of short lactation. In a year, a cow gives milk for about 10 months with more than 12 litres of milk a day during peak milking time with a fat content of about 4.5 per cent.

Thus, from the above facts one can rightly conclude that the Indian Gir Cows are indeed the key to a farmer’s prosperous well-being.

Klimom Wellness & Farms is pledged to increase the population of Gir Cows in India.